With almost 200,000 new residents over the last ten years, Austin is a burgeoning metro area with lots to offer. The capital of Texas is known for its excellent music scene, great restaurants, growing economy, outdoor recreation, and friendly atmosphere. Though the city is home to nearly 1,000,0000 people, Austinites appreciate its small-town vibe.

Are you thinking about relocating to the Lone Star State's fourth-largest city? If so, you might be wondering whether you can afford to live there. At Zeus Living, we want to help you make the absolute best choice for you and your family. Find a detailed breakdown of rent in Austin, Texas below, along with other useful information about the cost of living.

If you're considering a move to Austin, you're not alone. From 2010 to 2019, it ranked fifth in the U.S. for the highest population increase—and it's easy to see the appeal. The average rent in Austin, Texas is 1,440, a relatively low rate compared to cities of similar size.

On average, one-bedroom apartments in Austin go for roughly $1,280 a month, which is almost 6% higher than last year's average. As for two-bedroom units, you're looking at around $1,610 a month.

The median rent for a one-bedroom unit in Austin is $1,190 and $1,470 for a two-bedroom. While one-bedrooms have increased in price, two-bedroom apartments saw about a 6% drop from the previous year.

What to Know About Rent Prices in Austin, Texas

Of course, you can find apartment rent prices in Austin, Texas substantially lower than the average rate. About 15% of Austin apartments rent for $700 to $1,000 per month. Roughly half go for closer to the average, with 53% renting between $1,001 to $1,500 per month.

Apartments in Austin are about 865 square feet on average, but sizes vary greatly among different unit types. Studios tend to be the smallest and most affordable units, though some loft-style studios offer impressive square footage.

One-bedroom apartments are usually closer to the average in terms of size. And as you'd expect, two- and three-bedroom units offer the most generous square footage.

Once a college town, Austin has slowly graduated into a large, quickly growing metropolis with lots to offer people from all walks of life. On account of its unbeatable live entertainment, lively culture, ample outdoor space—including Zilker Park, Barton Springs, and the Green Belt—and affordable real estate market, U.S. News named the city the number-one best place to live.

In terms of renter-occupied vs. owner-occupied households, units in Austin are split almost right down the middle. Roughly 48% (or 177,674) of homes are occupied by renters, 51% (or 192,369) are occupied by owners, and 1% are Austin vacation rentals or extended-stay units. That said, some neighborhoods in the city and the surrounding areas have significantly more apartment rental units available than others.

Most Affordable Neighborhoods to Rent in Austin

The most affordable neighborhoods in Austin include Johnston Terrace, Windsor Hills, Georgian Acres, Heritage Hills, Harris Ridge, and North Lamar. Johnston Terrace apartments rent for $1,060 a month on average, which is about $50 less than the other five.

St. Johns, Coronado Hills, Highland, and Copperfield are just slightly above the most affordable neighborhoods. Renting an apartment in these Austin communities will run you about $1,150 per month.

Most Expensive Neighborhoods to Rent in Austin

On the opposite end of the price range, the most expensive neighborhoods to rent are Tarrytown, Downtown, and the University of Texas at Austin. Tarrytown apartments go for $2,500 a month on average, and in the downtown district, it's closer to $2,825. Those renting an apartment in UT Austin's West Campus or the Medical District (home of Dell Medical School) pay an average of $2,580 per month. A plus is these neighborhoods are close to some of the best companies to work for in Austin, making for a short commute.

Most Popular Neighborhoods in Austin

Luckily, the best neighborhoods in Austin fall somewhere in the middle. Located on the east side of South Austin, East Riverside-Oltorf is the most sought-after area in the city. Apartments in this Central Austin neighborhood go for about $1,360 a month.

Then there's the popular suburb of Northwest Hills, where renters pay an average of $1,290. In the charming neighborhood of Anderson Mill, the median rent is $1,250. North Civic Association is an urbanized area north of Downtown Austin where rent is about $1,360 a month. Being close to so many fun things to do in Austin, this price is unbeatable!

How Rent in Austin Compares to Other Texas Cities

How does the average rent in Austin, Texas ($1,440) compare to other cities in Texas? Renting an apartment in the "Live Music Capital of the World" does cost a little more than other major metropolitan areas in the Lone Star State.

Cost of Living in Austin, Texas

Austin rent prices are one thing, but to really find out if you can afford to move to a city, you'll need to review the overall cost of living. Here's what you should know about how much it costs to live in Austin, Texas and its surrounding areas.

Out of 581 cities throughout the world, Austin ranks 273rd for cost of living with an overall cost-of-living index of 63.42. State sales tax in Texas is 6.25%, and Austin's city-wide tax is 1%. The combined maximum state and local tax is 8.25%. Not including rent, monthly expenses for a four-person family are $2,925 on average. For a single person, the number is closer to $830.

Grocery prices in Austin are reasonable compared to other major metropolitan areas in the United States. On average, a gallon of milk costs $3.10, a carton of eggs is $2.50, and a pound of local cheese is $4.70.

When buying wine from a local market, you can expect to pay an average of $12 per bottle, and a six-pack of beer will run you about $7. Tap water in Austin is safe to drink, but many residents still opt to buy it from the grocery store, where it's around $1.50 for a 1.5-liter bottle.

Dining Out in Austin

The cost of eating out in Austin really depends on where you go. You can spend anywhere from a few bucks to upwards of $100 per person for a single meal. A fast-food meal is roughly $7.50, and dining out at a relatively inexpensive eatery costs about $14 per person on average. An upscale dinner for two at any of the top restaurants in Austin is about $120.

When you're out and about, a pint of domestic beer is $4 on average, and imported varieties are closer to $6. For a glass of wine, you'll pay an average of $9. And as you'd expect, cocktails are the most expensive nightlife libation, running $12 each on average.

Thanks to Capital Metro, Austin offers excellent public transportation. Austinites can get around on the Cap Metro commuter rail and bus routes, which include services all throughout the city and to many suburbs in Travis County and Williamson County. A one-way ticket for public transportation costs $1.40 on average, and a monthly pass ranges from $32 to $96.

Taxi rides in Austin come out to about $2.50 per mile. The city also has ride-share services, including Uber and Lyft. As for gasoline, you're looking at an average of $2.05 per gallon, but this rate varies depending on the time of year.

Here at Zeus Living, we want to help people make the best decisions about relocating. That's why we offer affordable, modern long-term rentals in Austin, Texas, as well as many other major cities throughout the U.S.

Our furnished extended-stay units have equipped kitchens, with amenities like lightning-fast WiFi, smart TVs, cable, and comfortable bedrooms with premium mattresses and linens. Learn more about one of our long-term, furnished rentals, or book your stay today. 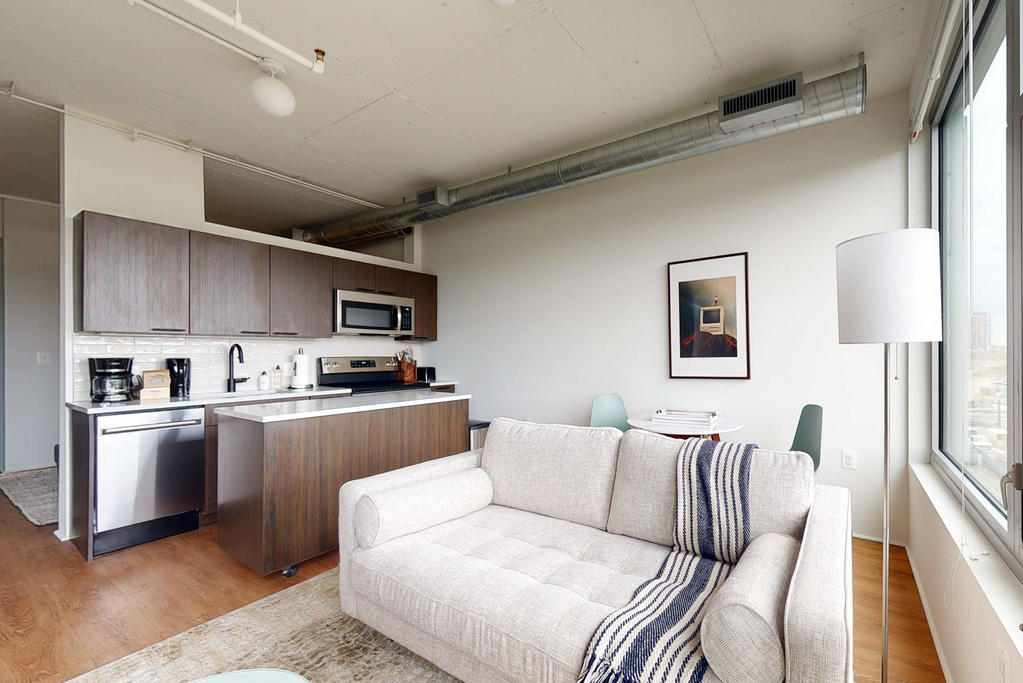 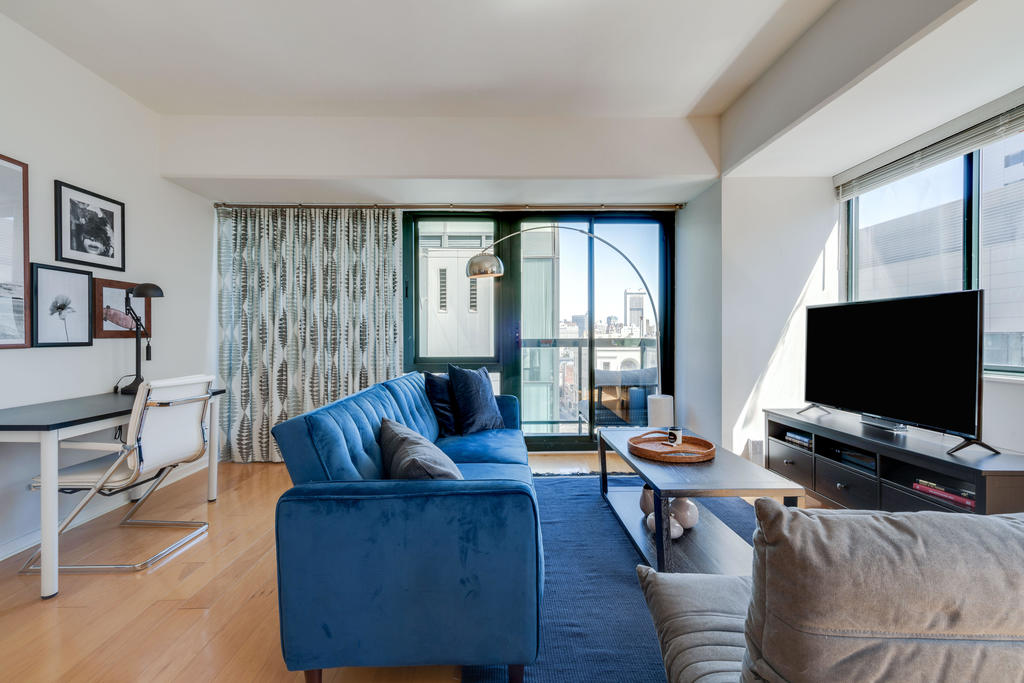